Brett Eastburn - Nothing Stops Him!

No Arms and No Legs Can't Stop This Guy

If you ever visit the John Glenn High School in Walkerton, Indiana, don't be surprised when you see Brett Eastburn zipping down a hallway in his electric wheelchair. Of course there are some places his chair won't go, so believe it or not, you may see him sailing past you on his trusty skateboard. Once you reach the parking lot, at the end of the school day, you may catch a glimpse of Brett driving away in his specially equipped van. That's right - even without the use of arms or legs - he drives a van.

Brett, or "The Stub", as he is called by his friends, was born without arms and legs. One would think this would restrict Brett's life greatly. Brett apparently doesn't realize this. (Maybe he doesn't know he's supposed to have arms and legs). Brett does not consider himself handicapped. He considers his body a very special gift. With that gift he inspires others to be the best they can be.

The words, "I can't", are not in Brett's vocabulary. If there is anything he has not yet accomplished, it's only because he has not yet tried. This is evidenced by the fact he is an accomplished swimmer, has played basketball, has played baseball, has played football, and is currently a member of his high school varsity wrestling team. He also placed 4th in the AAU (Amateur Athletic Union), national wrestling competition in 1988. In addition to his athletic accomplishments, he is a talented artist. A number of his drawings have received national recognition. He is truly an amazing young man."

There is a more recent article on Brett that appeared in the South Bend Tribune on April 21, 1999.

SOUTH BEND -- The fourth-graders at Darden Elementary School roared with applause when Brett Eastburn wiped, and then put on, his glasses.

Sure, it's a weird response--until you see that Eastburn's arms and legs are stumps that end above the elbows and knees. He was born that way. Eastburn giggled anyway and tickled his audience Tuesday with silly faces and silly voices. Life is goofy for this 2-foot-10 ½-inch man. Not impossible.

One of his favorite lines is: "I might give you the thumbs up, but I'd hurt myself."

Eastburn also drew a picture, tossed balls, wrestled with students and flashed a photo of his girlfriend. He explained how he drives a specially outfitted van and how he earned a green belt in Tae Kwon-Do. 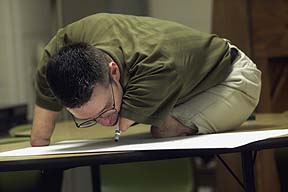 The 27-year-old from North Liberty graduated in 1991 from John Glenn High School, where he played several sports and loved wrestling the most. Aside from a couple of side jobs, he has made his living by giving motivational talks at schools. His can-do, funnyman gig has taken him to Japan, Mexico, Panama and across the United States.

Just what does "handicapped" mean? A lot of kids tell Eastburn it's someone who is disabled or who isn't able. That's what Eastburn used to think--until he looked at the Webster's dictionary definition. "A handicap is something that slows you down, something that gets in your way or stops you completely," he says in his most serious voice. "Ladies and gentlemen, it said nothing about someone."


The pupils gasped, "Hooooa!" when he hopped more than a foot out of his electric wheelchair and onto a table. He sent a football spiraling into the audience and asked, "How many people have heard it's all in the wrist?"


He talked about his first experiences as a point guard on the basketball team. He'd zing down the court at a breathtaking 7 miles per hour in his heavy wheelchair. But one time an opponent decided to block his path. Bad move.


"I turned that dude into a speed bump," Eastburn joked.


Officials told him they couldn't allow him to use the chair because it's too dangerous. "For whom?" asked the wisecracking Eastburn. But that was OK. Eastburn learned to hop and dribble down the court. Opposing teams couldn't do much but stare. "Nobody wanted to be the jerk to take the ball away from the cute little handicapped guy," he says. "I gave the other team the handicap."


If he was the one with the handicap, he asked, "how could it be that my team was always the one to win? I want you guys to understand: Handicaps are not always what they appear to be."

Overcoming that handicap requires more than the "baseball theory" that he sees in his fellow Americans, who give 110 percent but strike out and give up after three failures. It took him a lot more than three tries before he figured out how to turn a door knob. He finally realized he could use a curved portion of his right arm, which helped to counteract the action of his left stub. Eastburn also credits his parents for biting their lips and letting him learn on his own, rather than serving as his protectors and doers. His younger sister, Krista, takes credit for his wrestling abilities; the two would practice before he joined the school team. An education student at Saint Mary's College, Krista is doing her observation at Darden and helped bring him there Tuesday.


Brett disabled his two wrestling "victims," Michael Sobol and Brandon Sutton, with hilarious antics, then nailed their shoulders to the mat -- one, two. In one demonstration, he guided a marker with his mouth and arm stubs and drew Garfield the cartoon cat. He held up the picture and asked, "How many people can draw this?" When only a few hands rose, he told the others that they were missing the point.


Drawing Garfield--and accomplishing any daunting task--is just a matter of breaking it down into little pieces... a circle here, then another circle, a few arcs, a few dots... little things that anyone can do.

Brett is available for scheduling. You can either e-mail him at TheStub103@aol.com or write him at:


Back To Pet Peeves-